You are here: Home » News » Company news » Where is the most promising kitchen equipment market in Asia?

Where is the most promising kitchen equipment market in Asia?

The answer is India.

From the perspective of Chinese customs data, India has become the largest importer of induction cookers. Based on the same voltage, these induction cooktops and induction cooking equipment made in China can be directly used in commercial kitchens in India.

There is no doubt that the popularity of Lestov induction cookers is inseparable from the integration of Chinese food and Indian food. Food culture has no national boundaries.

Chinese food entered India from the tide of immigration after the Opium War in Twenty century. Many Hakka Chinese, a minority ethnic group in China, immigrated to India to build railroads for the East India Company. Most settled in the northeast, in cities like Darjeeling and Kolkata, due to its proximity to China.

These Chinese people living in a foreign land soon began to miss Chinese cuisine. They use the newly discovered local Indian ingredients to recreate their beloved dishes. In this way, a new type of cuisine occupies most restaurants in India. Through the combination of classic Chinese techniques with the aromatic spices of Indian, Some representative dishes were created, like chicken lollipops, Hakka noodles and vegetable Manchurian.)

Here is the photo of Hakka chili chicken.( Remark: the photo courtesy of The Chinese Club ) .Is it so delicious? Right? 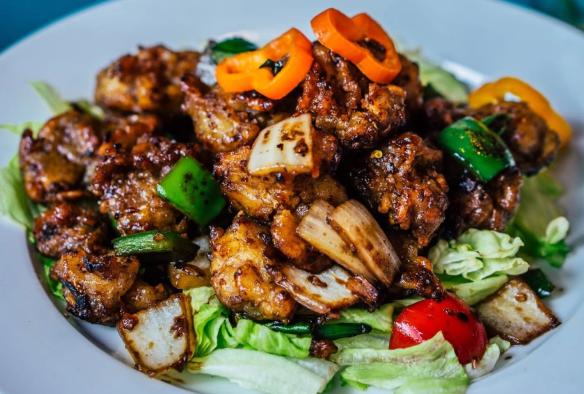 Chef Salil Mehta from the family of "Stacey Lo" recalled that "Lo’s great-grandfather opened up the original Chinese Club in 1914 in Darjeeling in order to bring a taste of home to the Hakka Chinese community". According to Lo, it didn’t take long for Indian generals to start frequenting the place, asking for traditional dishes with increasing amounts of Indian spice and seasoning. Before long, the food became equal parts of Indian and Chinese.

For more than a century, Indians have gone nuts for Indian-Chinese cuisine. In fact, you can see many chefs in Chinese restaurant, and Chinese love the pan cake of India very much. Cooking has undoubtedly become part of the epitome of historical and cultural exchanges between the two countries. As a professional induction cooker manufacturer in China, we can provide complete kitchen solutions. Every year, we receive a lot of good feedback from Indian customers. Very grateful to the Indian friends for choosing induction cookers manufactured by Qinxin Company.